Where would the Dutch be without windmills? Unless they’d built their houses and roads on poles sticking up to seven metres out of the seabed, anywhere but Holland. 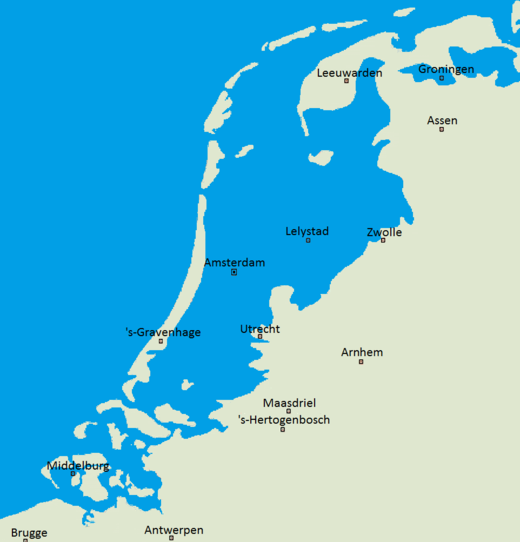 The saying, ‘God made the world but the Dutch made Holland’ is perfectly true (if you believe in God), as you can see from the diagram, which shows what’s left of Holland if you remove the windmills: a measly strip of land (sand dunes) about 10km wide enclosing a large lagoon off the coast of towns like Utrecht and Zwolle. Everything else we now know as Holland, is polder that’s below sea level and needs to be constantly drained.

Central to pumping the water up to a channel at a higher level so it can be drained into the sea is the Archimedes screw. As the screw turns inside a pipe, it continuously scoops up water and draws it all the way to the top of the pipe where it spills out. Today, the screw is powered by electricity, before that it was steam and before steam it was the humble windmill that provided the necessary torque.

(In Archimedes’ day, they had animals and slaves. Archimedes probably didn’t invent the device, incidentally, but ‘brought it back’ from Egypt where he is believed to have studied. In fact, the screw may well have been used to irrigate the Hanging Gardens of Babylon, one of the ancient wonders of the world.)

The old village of Bergen was built on a number of beach ridges that were joined together by elevated paths. Life and farming took place on these ridges; the surrounding terrain was a marshy swamp that could not sustain livestock or crops. In order to continue to feed a growing population, land had to be reclaimed and in 1555, Lord of Bergen Hendrik van Brederode and Lamoraal, Count of Egmond, took the initiative to completely drain the bodies of water between Bergen, Egmond and Alkmaar, the Bergermeer and Egmondermeer (Lakes Bergen and Egmond).

The Alkmaar region pioneered the drainage of lakes in Holland, with the first small lakes being experimentally drained starting in 1533 with the Achtermeer, south of the town. That was just 35 ha, however, and Van Brederode and Lamoraal had much grander plans, as ‘their’ lakes covered a considerably larger 620 ha and 686 ha respectively.

First, an incredibly long ring-ditch was constructed by digging a deep trench and piling the clay that came out of it on either side, conveniently creating raised embankments that act as dikes and enable the water level in the ring-ditch to be higher. Then, six windmills (three for the Egmonder- and three for the Bergermeer) were erected to pump water into the ring-ditch from the now enclosed lakes, gradually draining them completely to form new, reclaimed land, a process which took two years and was completed in 1566. The resulting polder was the largest ever seen, and no doubt lessons learned here were put to good use when the comparatively huge 7,208-ha Beemster Polder southwest of Alkmaar was drained about 50 years later.

Unfortunately, the Berger- and Egmondermeer Polders were dry only until the All Saints’ Flood of 1570 put them (and much more of Holland and today’s Belgium) under water again. It would take nine years before the polders were drained once more, and one of the windmills deployed as part of that effort in 1579 can still be admired today: the Viaanse Molen, or Cleyne Viaan (Small Vianer), so-called probably because Van Brederode was also Lord of Vianen, a small town just south of Utrecht.

Today, the Viaanse Molen stands just outside Bergen’s municipal border in Alkmaar. And it still works, serving as backup for the modern, electrically-powered pumping station that’s responsible for the drainage of 464 ha of the Bergermeer Polder. It is set in a small, green park sandwiched between roads and a business estate. For this reason it’s best reached by bicycle or boat, but tapping ‘Havinghastraat 18, Alkmaar” into your sat-nav will get you close. It’s a lovely place to have a quick wander around, you can see across the main road into the Bergermeer Polder and if you’re lucky, you’ll happen upon rare bee orchids (ophrys apifera) in bloom.

The only two windmills left in Bergen itself are the Damlandermolen and the Philisteinse Molen, both drainage mills. They can be admired if you take a walk or cycle south towards the old airfield.

The Damlander Molen stands right on the edge of the village where the Meerweg crosses the ring-ditch to become the Groeneweg.

It is currently undergoing a complete renovation and facelift. Poor maintenance and its sheer age had left its foundations and lower course sodden, and these have been replaced. Apart from one major structural beam, however, the original frame remains. The owner, who started the project three years ago, expects the mill to be restored to its former glory by 2022. It won’t be a working windmill, but will look the part and function as a living room.

The Philisteinse Molen does still function and although it can easily be seen, it’s a little more difficult to get to. Only a dirt track takes you there and it is advisable to walk or cycle. The smock mill was built in 1897 and may be visited by appointment.

Further south, in the Egmondermeer Polder, two more mills can be admired. Both fully functioning, the Bosmolen and Wimmenumer Molen (not pictured on this page) stand in the Egmondermeer and can be reached on foot and by bike by skirting around the old airfield and by car if you head towards Egmond aan de Hoef via Alkmaar and Hoeverweg. 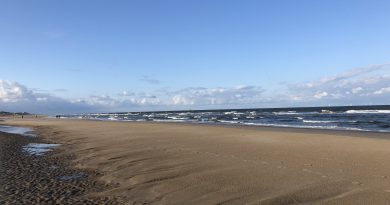 18th September 2018 Robin Comments Off on The Beach 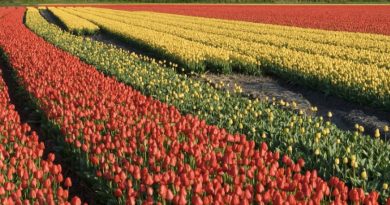 15th March 2019 Robin Comments Off on The Bulb Fields 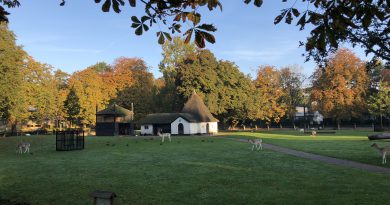