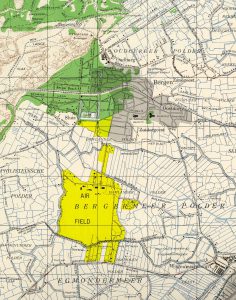 That’s right, Bergen used to have its own airfield, albeit a military one. It was commissioned in the 1930s by the Dutch government and opened for service in 1939. A squadron of 12 Fokker G.1 fighter-bombers was stationed at the airfield until it was bombed and put out of action by the Germans in the early hours of 10 May, 1940. The Germans subsequently rebuilt the airfield and stationed a squadron of their infamous Messerschmitts Bf 109 fighters here. The airfield served the German war effort by contributing to coastal and air defence, and the fighters also flew escort sorties to provide protection to bombers heading across the North Sea to bomb English targets such as the industrial powerhouse Coventry.

Allied bombers that couldn’t reach their initial targets in Germany due to poor visibility on 4 May, 1944 unloaded their bomb bays on Bergen Airfield instead. The damaged airfield was finally put out of action by the Germans themselves shortly after D-Day on 10 June, 1944 for fear of it being captured.

As part of Operations Manna and Chowhound at the end of the Dutch hunger winter of ’44-’45, food and other provisions were dropped over what was left of Bergen Airfield in the beginning of May, 1945.

The site was never operational as an airfield again. It was in use as a mobilisation complex and munitions storage site by the Dutch Ministry of Defence until 2004 and today it is an ‘eco-village’, where a community of people endeavour to live sustainably and self-sufficiently.